Businesses in the UK construction sector have been hit by a leap in payment delays, with invoices taking an average of 69 days to be settled.

Analysis of more than 13,000 companies by Funding Options, the online business finance supermarket, shows that delays have risen 8% in the past two years.

It warns that a single late payment can be an issue even for successful firms, which can be caught out if a major client delays a payment significantly. If that late payment coincides with a major bill coming in, such as a tax, VAT or rent payment, the consequences can be severe.

Furthermore, the construction sector has a long supply chain which includes many small and medium-sized enterprises and delayed payments could create a domino effect that impacts hundreds of small suppliers.

Slow payment of bills is a major reason why the construction sector has such a high number of insolvencies; 2,557 construction firms entered insolvency during 2016.

Conrad Ford, CEO of Funding Options, said: “What this data again underlines is that the construction sector has a persistent problem getting clients to pay early on.

“Long supply chains in industries like construction mean that the ripple effect of delays is likely to affect many other businesses further down, with SMEs hit the hardest. In an industry with high overheads in terms of materials and labour costs, this can be difficult to deal with.

“These figures show that it’s more important than ever that the construction sector fully understand the options available to them to free up the funds they require and to minimise the impact of late payment and other poor payment practices.”

Ford added: “Unfortunately, small businesses leaders often don’t know which sort of finance is the best fit for a particular need, or who is out there to provide it.”

Funding Options as a UK online marketplace for business finance, raising tens of millions of pounds for SME finance each year.

It works with dozens of lenders across the alternative business funding spectrum, from challenger banks to invoice finance, hire purchase, leasing, peer-to-peer lending and property funding.

Funding Options has been designated by HM Treasury and the British Business Bank for the bank referral scheme, to help UK SMEs find alternative finance when they are unsuccessful with the major banks.

Average wait in days for invoice payment in construction sector 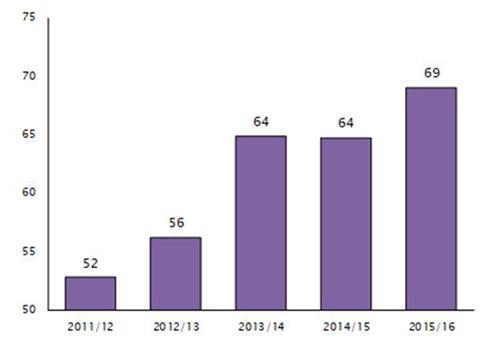 The Prime Minister has committed to building “more houses, more quickly” as the government comes under further pressure on the growing housing crisis.

The government will announce measures to “fix the broken housing market” in “the coming weeks and months”, Theresa May said.

The Prime Minister was speaking ahead of new housing supply figures, which are due out tomorrow morning.

May said: “For decades we simply have not been building enough homes, nor have we been building them quickly enough, and we have seen prices rise. The number of new homes being delivered each year has been increasing since 2010, but there is more we can do.

“We must get back into the business of building the good quality new homes for people who need them most.”

May was speaking ahead of an announcement given today in Bristol by communities secretary Sajid Javid to wipe housing associations’ debt off the balance sheet.

Javid will say: “There are many, many faults in our housing market, dating back many, many years. If you only fix one you’ll make some progress, but not enough. This is a big problem and we have to think big.”

Last month the minister called on his cabinet colleague Philip Hammond to consider borrowing billions at current low interest rates to boost house building. However City A.M. understands the chancellor is cool on the measure – or indeed anything particularly radical – being included in next week’s Budget.

There are many options when looking to fund your next property development project. The way in which you structure any borrowings will have a significant impact upon your long-term returns. We have covered some of the more common project development finance routes below with comments and observations.

After the 2007/8 sub-prime mortgage collapse in the US, which spread throughout the world, it can be difficult to obtain affordable bank funding for property projects. Traditionally banks tend to work on a 70% loan to cost (LTC) ratio and may exceed this at a cost. Performance for larger loans is a real issue however. For some developers this can leave a significant shortfall which may need to be filled with relatively expensive additional forms of finance.

While interest rates on property development funding will vary from project to project, if the LTC ratio is less than 70% interest charged is usually sub 5%, 7% – 8% on loans from 70% to 80% LTC and between 10% and 12% on loans where a higher than 80% LTC has been secured.

As we touched on above, other forms of property development finance may need to be used in conjunction with traditional bank funding to fill any shortfall. One popular option is mezzanine finance which is traditionally in the region of between 10% and 15% of LTC. Mezzanine finance is less expensive than equity finance as it is normally a fixed rate and is ahead of equity in case of losses and allows the developer to retain their equity share.

There are pros and cons to equity funding with investors sharing both the risks and the rewards. Where little or no funding is required the equity returns can be relatively high for the developer. However, where an additional equity investment is required the profits may be split on a 50/50 or pro rata basis, depending upon the details of the agreement. This can have a significant impact upon the returns for a developer although, as we mentioned above, both parties will also share the risk.

In theory equity funding is one of the more expensive options but done correctly it can allow a developer to significantly leverage and increase the size and quality of schemes they undertake. Over the last few years we have seen crowdfunding become more popular and there are also various networks of high net worth individuals willing to invest in property developments. As ever, it is a case of balancing the risk/reward ratio against the profits which you are “giving away” to other equity investors.

Paul Middleton said that although the housing figure would be quite a challenge to fulfil, it could prove to be a positive move for rural landowners.

The council’s cabinet approved a consultation document last week, which will seek the views on the preferred scale and distribution of future developments across Shropshire.

The review includes building 28,750 homes across the county, while the consultation document also looks at employment growth.

The consultation period began last week and closes on December 22.

Mr Middleton, of rural surveyors and estate agents Roger Parry and Partners, said: “A housing figure of 28,750 across the county is quite a challenge to fulfil, that equates to a delivery rate of around 1,430 dwellings a year.

“It therefore follows there will need to be development in the rural areas to assist in meeting these targets, and this places great emphasis on the emerging Hierarchy of Settlements policy.”

Mr Middleton added: “If adopted, the Hierarchy of Settlements could provide opportunities for development that presently are not achievable, which is very positive indeed for rural landowners.

“We will of course be liaising closely with the council during the course of the consultation to ensure that our planning team are best placed to advise clients on the development opportunities, that will undoubtedly come to fruition in the future.”

Ian Kilby, planning services manager, said: “In the recession there were about 800 houses built per year, and last year we had 1,910 delivered.

“It’s only a few years ago that next to no houses were being built.

“There was significantly more development last year than there was.”

But the council admitted that, as of this year, there were more than 11,000 cases where planning permission had been granted for homes where construction was yet to start.