More than 600 flats for rent are being planned as part of a £262 million scheme to transform a tired industrial estate in Hove.

A further 265 self-contained flats aimed at older people with care needs are also proposed for what the developers said was “Brighton and Hove’s largest brownfield site”.

They also promised “new open areas, green spaces and nature trails” on the nine-acre site near the top of Sackville Road.

And there is even the prospect of a new footbridge at Hove station and links with neighbouring schemes such as those in Newtown Road where KAP Peugeot wants to build almost 150 flats.

The housing association Hyde has almost finished building dozens of homes on another nearby site in Newtown Road.

The latest scheme involves demolishing all the current buildings on the Sackville Trading Estate and Hove Goods Yard – between Sackville Road and Hove station.

The details of the scheme are set out in a planning application which has been accepted by Brighton and Hove City Council from build-to-rent business Moda Living and the landowner Coal Pension Properties.

They include a series of blocks up to 13 storeys high, containing homes, shops and offices and “a multi-functional health and wellbeing centre”.

The scheme has been submitted to the council a month after outline plans for Toads Hole Valley where another developer hopes to build 880 homes on the northern edge of Hove.

The progress on both sites comes as housebuilder Crest Nicholson appears to have stalled with its scheme for the King Alfred Leisure Centre on Hove seafront.

Crest was picked as the council’s development partner almost three years ago to build hundreds of flats and a new swimming pool and sports facilities.

But the long delay in signing a key agreement has prompted councillors to call for Crest to be dropped.

The Sackville Trading Estate site has been the subject of previous planning applications but recently a great deal of attention has been focused there and on the wider area around Hove station.

Moda Living and Coal Pension Properties said that the site was in a strategic position within the designated “Hove station development area” in the council’s City Plan.

The Hove Station Neighbourhood Forum has been working on a wider masterplan for the local area.

Moda Living and Coal Pension Properties said that the Sackville Trading Estate and Hove Goods Yard had been identified for redevelopment for a number of years.

Their proposal, they said, would “secure the long-awaited redevelopment of this underutilised part of Hove”.

They also said that their scheme would provide “significant investment to enhance the overall vibrancy of the site while acting as a catalUyst for the wider regeneration of the Hove station area and of the city as a whole”. 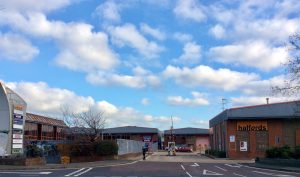 The applicants said: “The site is characterised by a general industrial / commercial feel, with the vast majority of the site currently underutilised with relatively low levels of employment.

“Previous attempts to see the site redeveloped several years ago were victim to the economic downturn and many of the units on the site have been vacant or under-used for a number of years in anticipation of redevelopment.

“Moda Living is an owner / operator / investor which is at the forefront in the new and ongoing build-to-rent revolution across the UK rental landscape.

“A key focus for Moda is the creation of spaces for residents to live, work and play with an array of high-quality amenities such as lounges, cinemas and gyms as well as services such as 24-hour concierge and on-site management teams.

“Build-to-rent developments planned and managed by Moda provide much more than residential accommodation, creating place-making which provides a lifestyle for residents.

“Moda is playing a significant role in the regeneration of several cities across the UK, with developments (consented and under construction) in Manchester, Leeds, Birmingham and Liverpool.

A proposed entrance to the Sackville Road scheme

“Moda is creating destinations not just for residents but for the wider community to use and enjoy with high-quality environments offering spaces to ‘live, work and play’ for residents and visitors alike.

“The regeneration of the Sackville Trading Estate and Coal Yard represents an opportunity for Moda to bring their city living offer to Brighton and Hove and provide much needed housing for the city.

“There is also a long-term aspiration for a new footbridge link connecting the site (at the southeast) with Hove station.

“Discussions are ongoing between the applicant and Network Rail over the feasibility of such a link and the proposed development has been designed to accommodate a potential future footbridge as the applicant remains committed to providing a direct link from the site to the station if at all possible.”

The plans include 307 parking spaces for cars, almost half of them in the “care community” for older people, to be run by Mayfield Villages.

The applicants said: “Mayfield Villages is a new care community brand owned by Audley, an experienced and well respected owner and operator of high-quality care communities for older people.”

“When a resident decides to live in a Mayfield community, they have decided that they no longer wish to, or no longer can, live in their own homes.

“The reasons are many and can involve, illness, bereavement, the after-effects of major surgery, a break-in or simply ageing when the stairs and garden become too onerous to navigate or maintain.

“The average age of entry for residents in Audley’s existing villages is currently 79 years and it is anticipated that the same will be true for the proposed Mayfield Villages development.

“The projected employment levels for Mayfield’s care community in Hove is anticipated to be 75 full-time equivalent staff.

“Mayfield organise and facilitate a full weekly calendar of activities ranging from lectures to language classes, from bridge club to visits off-site. Residents decide what they want and how they want to live.”

The council is aiming to decide whether to grant planning permission by Thursday 7 March.